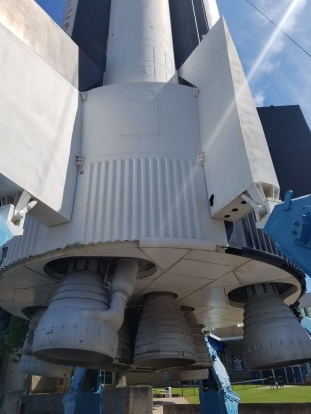 The 9th of July had arrived.  My sons and I had just returned to New York from a trip to Florida, and here I was, back at the airport with two jittery students on the beginning of our journey to Huntsville, Alabama for a week of Space Camp.  The first thought that ran through my mind was, “What was I thinking?!”  I could have have spent that week plopped on a beach blanket, dozing to the sound of the ocean waves rolling in and out.  Little did I know that the adventure ahead would shift the way I perceive the oceans, the land, the planet, the cosmos, myself, and all of humankind.

Believing that there are no coincidences in this life, I knew as we boarded the plane that, fears aside, I should embrace this experience with complete, mindful attention.  After the mindful flight into the deep South, we disembarked our plane and were greeted by a swarm of other teachers and students in matching blue, Northrop-Grumman t-shirts (a sponsoring company for the camp) along with cheerful Space Camp counselors donning the coveted blue space suits and flight jackets with mission patches galore.  Mindfully observing all of these people, their expressions, gestures, conversations, I couldn’t help but absorb their excited energy.  I knew I was in for something interesting, and I was ready.  I winked at my two students, and onto the Space Camp bus we went.

The NASA Space Camp (the genius of Wernher von Braun and Edward O. Buckbee), from just a mere aesthetic perspective, is a breathtaking celebration of human achievement and an awe-inspiring glimpse of our solar system and beyond.  Exiting the bus, the Alabama heat and humidity struck me like a blow.  My students were giddy, but clearly petrified as well.  This is where I was to leave them for the week, as the students attend a camp that is separate from the educator program.  The mommy in me knew what to do.  I pointed to the sci-fi inspired-looking “habitats” in which they would be staying and told them I was insanely jealous, as I’d be staying in a University of Alabama at Huntsville dorm a mile away.  I added that their friends would be envious too, especially when they heard about all of the other cool girls (and potentially cute) boys they would be meeting from around the globe.  They giggled and went on their way, as did I. 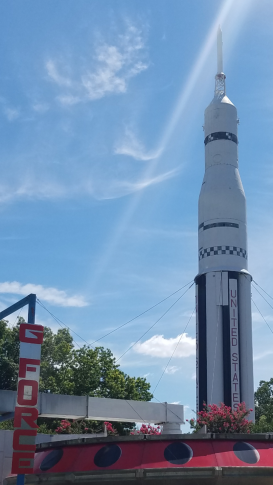 The following morning began with a tour of the campus, which I mindfully took in with all senses.  It was infinitely more impressive than images I remembered from the 1985 Space Camp movie which was my only frame of reference.  The Space Shuttle, Pathfinder, and a number of impressive jets, jut like spires into the sky.  Simulators such as G-Force and Space Shot promised the thrill of experiencing free-falls and 3G of force as the astronauts did.  The A-12 Oxcart stealth jet, so secretive at the time it was not even named, was thrilling to behold.  A scale model of the lunar module in a living diorama of the lunar surface provided a 3 dimensional perspective of the landing as the astronauts perceived it themselves.  A bronze astronaut statue, and even a memorial for Miss Baker, the space monkey (with bananas lovingly placed on top by young fans) roused an amazement in me at the bravery and sacrifice all who made these feats of flight and space exploration possible. 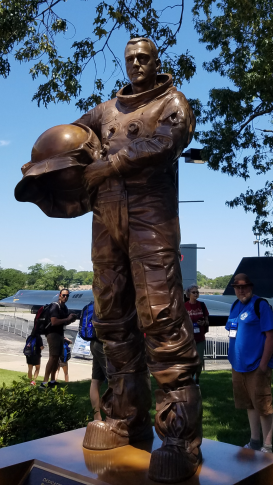 This experience would have impressed anyone, but bringing mindful attention to the experience provided a different perspective than one I may have had before my shift in awareness.  My device was silenced and used only for the occasional photo.  I wasn’t rude or aloof, but I tried to limit the idle chit chat so I could really focus on my sensory experience.  I focused the bulk of my auditory attention on the counselors who provided the background info for what I beheld with my eyes.  I focused my visual attention on both the grandiose structures like the shuttle and the rockets, as well as the minutia, like the smaller bits that held structures together, the play of sunlight on metallic surfaces, strange plants, birds, and bugs dotting the landscape, and the diversity of the faces around me.  In such surroundings, there was clearly no turning off of thoughts, but I consciously identified and acknowledged how different thoughts made me feel.  I realized that mindfulness during experiences like these not only makes for a more enriching experience, but plants experiences in our long-term memory more completely than any photograph.