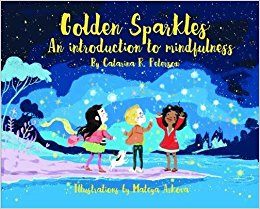 Golden Sparkles: An Introduction to Mindfulness

What ARE “golden sparkles?”  As the beautiful text by Catarina R. Peterson unfolds, accompanied by the whimsical illustrations of Mateya Arkova, the reader begins to understand that “golden sparkles” describes the sensation that fills our hearts during mindful interaction with the world around us. Golden Sparkles taps into the awe and wonder of a child’s experience and gently conveys the methods for maintaining this inherently mindful outlook throughout trials and tribulations of later life. It is a simple analogy used to describe a most profound experience.

Peterson’s book charmed me right from the start as it is dedicated to each member of her preschool class, (each addressed individually), who she thanks for being both teachers and fellow learners, NOT mere students.  In my experience the most mindful and reflective educators perceive their students in this way.

The language of Golden Sparkles is poetic with a gentle rhyme which flows quite like the breath, gently “in… and out…” making it a delight to read aloud.  Highlighted words throughout the text conjure peace and relaxation.  They are defined sequentially in a glossary at the end of the book and can serve as talking points between reader and child. Timeless universality is an important theme, as children are reminded that through mindfulness practice, golden sparkles are literally just “a breath away” no matter where, or who you are.

There is depth in the simplicity of the illustrations.  Arkova skillfully uses a soul-soothing, pastel palette to immerse the reader in Peterson’s story.  A delightfully depicted trio of friends, each with their unique charm, effectively capture the calm, serenity, and gratitude that can be achieved by applying mindful attention to everyday activities (a picnic, a bike ride, a meditation).  Golden sparkles literally emanate from their hearts!

The foreword by Vicki Zakrrzewski, Ph.D., Education Director of the Greater Good Science Center at UC Berkeley, invites readers to ponder the long-term effects of mindfulness practice on children.  I think of the ways mindfulness has improved my life and it warms my heart to know that authors like Peterson may succeed in introducing mindful living practices to the children, as they will shape our future world.  During these turbulent times marked by devastating current events, this gem-of-a book is a “golden sparkle” in itself.